One of our newer members, Elizabeth Nguyen, unfortunately had an accident in her Tesla. Here's her post from Tesla Motors:

So the day started off great. We met some other Tesla owners at the ribbon cutting ceremony for the Loveland, CO SC Supercharger - Loveland, CO Was coming back from that afterwards and decided to take a detour to do some grocery shopping. While waiting to turn left in the left turn lane, another car was driving towards us and drifted and plowed into the front driver side, instantly deploying the airbags for driver and passenger. it was a mess and the acrid smell from the airbags being deployed will stay with me for a long time. Fortunately, we are OK as is the other people in the other car. However, it had to be towed. I am still so angry at the senselessness of the whole thing and am grieving for my beloved Tesla.

We were fortunate that @MorrisonHiker and @DÆrik were in the area and were able to give us a lift home. Thanks, you guys are great people!It's never a good time to have an accident and the senselessness of it is hard to take but it's NYE and nothing will be open until Tuesday, probably. It's a celebratory mood killer, too.I know several people have posted about their accidents and differences in location can also contribute but I'm wondering if anyone has guesses on how long it'll take for this to get fixed (providing they don't total). I'll be driving a rental ICE in the meantime and hating every moment, I'm sure. We'll definitely be making sure they pay for diminished value but not sure there's much more I can do with this to alleviate the hassle. 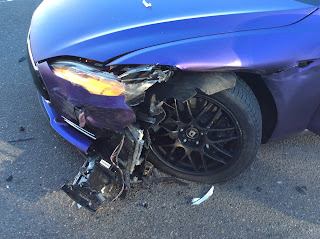 Posted by Colorado Springs Electric Vehicle Club at 7:09 AM