Thanks to our club members, Mike & Mary Ann Witter, for the notice of a car crash involving a Tesla in Colorado Springs this past week. Our club President, Mac McCauley, did some research on the event. You never know when you'll need the safety a Tesla gives you!
=================

On the above date and time the Colorado Springs Police Department was notified of a three car crash in the intersection of N. Academy Blvd. and E. Bijou St. Upon officers arrival, it was discovered that 6 of the 8 occupants of the three vehicles were injured and needed medical treatment. All were subsequently taken to a nearby hospital for treatment. The Major Crash Team responded to the scene and assumed the investigation.

It was determined the driver of the Ford, 29 year old Michael A. Tucker of Colorado Springs was impaired. He was subsequently placed into custody for Vehicular Assault, DUI, and other charges. Although some of the occupants of the involved vehicles were seriously injured, none of the injuries are considered life threatening.

The intersection was closed during the investigation and re-opened at approximately 5:55 PM. 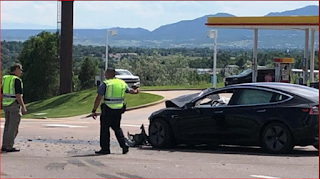 Posted by Colorado Springs Electric Vehicle Club at 6:56 AM