Charging at a canal

A friend I have (Tom Croak) in the Mercedes Club of America (Pikes Peak Section) who visits Europe frequently and he sent me a photo of the canals in Amsterdam. Tom's comments were:

There seems to be a charging post on every block along the canals. I was told they would add more as needed. Also took the canal tour in a mini-yacht built in 1909 that had been converted from diesel to electric four years ago. Guide said that all canal tour boats had to be converted by 2022.

I have seen so many Model S taxis here, it really made me wonder. Today I got the explanation. The Airport has a rule that only electric taxis may be on their grounds. By 2022, all taxis in the city have to be electric, same deadline for all tour boats to be converted. I got varying stories on when all cars that are not electric will be banned from the city.  Of course, the primary mode of transportation here is the bicycle, so you can see the push from the people to reduce emissions.  The city has an excellent system of electric trolleys that will take you most places in the city. It is a very clean city and we have greatly enjoyed our visit. 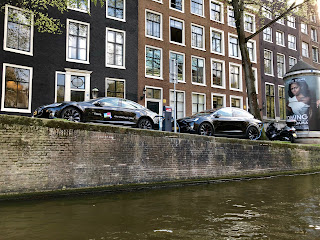